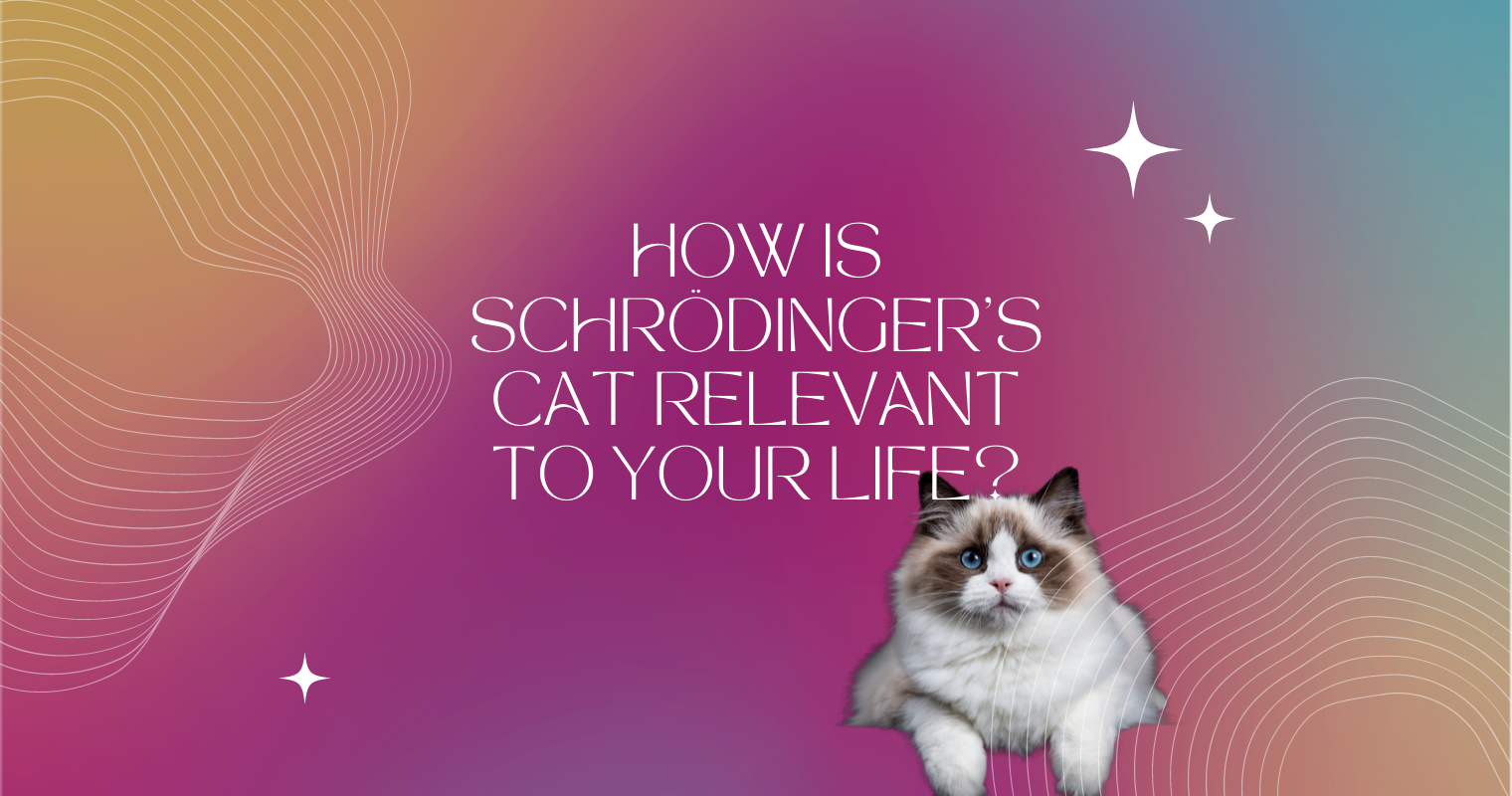 What is the application of the Shrödinger’s cat to your life?

Weren’t you exalted when you first heard about Quantum physics, and the Schödinger’s cat?

Most people have heard ‘something’ about quantum physics and Shrödinger’s cat but are still very far from comprehending its applications. The most famous experiment on quantum physics was the double slit experiment that proved that the observer can change the behavior of light photons (in other words reality).

Briefly explained, this experiment involves a beam of light directed to go through two parallel slits of a screen. The beam ends up on photographic paper on the other side of the screen. The experiment was done with and without photon detectors installed next to the slits. Whenever there was a photon detector installed next to a slit, the light photons would go through that slit, be it the left or the right one, and depending on the side the detector was installed. When two detectors were installed, one next to each slit, sometimes the photons would pass through the left, and sometimes through the right slit. When no photon detectors were installed, the light would record on the photographic paper behind the screen as a wave (it would exhibit its wave nature, not its photonic nature).

There’s even a more impressive experiment, though, performed by John Wheeler in 1983(!!!!), who made the same experiment in a ‘cosmic’ setting. In Wheeler’s experiment the source of light is a quasar (a very bright distant galaxy). Two other big galaxies, located between the quasar and Earth, take the role of the slits in the previous experiment, as the gravitation of massive objects breaks the light in a manner similarly to the slits in the experiment described above.

The astronomers (The Observer) from Earth registered the same results – whenever they observed – they ‘saw’ photons. Whenever they didn’t observe, the photons ceased acting like particles and instead registered their wave nature on the photographic film.
The HUGE CONCLUSION from this second experiment is that the observer can change the nature of light with one’s observation, even though the light had originated from the quasar millions of years before the experiment was conducted, while it had been travelling to reach the Earth telescope!

Shrödinger’s cat: Do you know what this means!?!

For one, it means we can change the past, and really change it, rather than our perception of it. Which thinking about quantum physics should in the end be the same.

A few months ago, I recorded a video on ‘Heal Traumas with the Silva method’, where I talked about wiping the past out with a sponge while in alpha state and then replacing the memory of it with a more positive one.

I explained the healing effect by the rearranging of brain neurons to ‘simply’ start perceiving the past differently. Now, the above sheds a different light to our work with the Silva method.

It actually logically proves you can indeed change THE PAST AND THE FUTURE….

In the Silva method the past and the future are ‚seen‘ along a horizontal continuum, where the left (direction) represents the future and the right represents the past. No, it’s not the other way around! Jose Silva, the founder of the method has completed years of research involving people. Human subjects to define the best application of our spacial orientation related to our concept of the timeline continuum.

The Silva method is not simply a mental tool but a tool that integrates the mind-body connection, the mind-emotions and even the mind-soul connection. So, our bodily spacial orientation has a direct link to the timeline continuum we are working on, while in alpha level.

For example, when we intend to work on programming a future event, it is best to either lay on our back, or lay on our left side to connect to the ‚future timeline‘. Likewise, when we are working to transform a past experinece, we better lay down on our right side.

People tend to perceive the concept of an energy universe mostly mentally, and nod their heads in understanding. Which is what I also used to do. However, it takes a step further to realize that this energy permiates everything. Our bodies, our emotions, our souls and this in turn shapes our realities. When we work on our bodies – it is also energy work. Just at a different energetic density.

There is an interesting tool in the Silva method that makes an application of this concept. It is called ‚The three-finger technique‘. And it lets you encode an energy programme by using this mind-body connection. Watch this video to find out more on how to use this Silva method tool.

I have a class on Manifestation with an introduction to the Silva Method Ultramind system.

It is a part of the course: Manifesting, Deeper Dating® and Love Mastery!

I have used the quantum physics experiments as described in the book: